I slacked on keeping my series on race going. I finished Waking Up White about a month ago. I read it slowly, really absorbing the material. Also, I made screenshots of a lot of quotes and the questions at the end of the chapters that spoke to me.

One such quote (and I’m sorry I read this on a Kindle, so I don’t know what page it was on—Kindle folks: location 3061 of 4136) is “Though I never feared for my safety, or that I’d lose status or friends, I did spend most of my life thinking I had to make a choice between being either a polite person or an angry activist.”

Did you ever watch The Real World? Boy, I just loved Puck and the guy who thought he was Garth Brooks. On the beginning credits of the show they had a one-liner: It’s Time to Stop Being Polite and Start Getting Real.

For a long time, I spent my life being polite. When I moved back to Montgomery, I left my voice in D.C. I nodded along with people made derogatory comments. I nodded along when people made fun of Liberals (I am a liberal!). I didn’t realize how much I was a people-pleaser, until I moved back to a place that thought everyone with white skin thought the same way they did.

I didn’t stop being polite until after Trump became president. Then I felt like I had to do something. My mother and I became activists, fighting for what we think is right for all people. Stop being nice and start being your true self.

What does it look like to stop being polite and start being real, you may ask. It’s simple:

Waking Up White by Debby Irving

At The Dark End of The Street: Black Women, Rape, and Resistance–A New History of the Civil Rights Movement from Rosa Parks to the Rise of Black Power by Danielle L. McGuire

Just to name a few.

Recently my husband and I visited Memphis on a getaway. We went to the Civil Rights Museum there that’s located inside the Lorraine Motel where MLK, Jr. was killed. Below are a couple of pictures from that visit. Visual reminders why we need to keep fighting for equity, equality, and for the right thing. America should be a place where everyone can achieve their dream.

View from Inside the Lorraine Motel to the balcony where MLK, Jr. was shot April 4, 1968 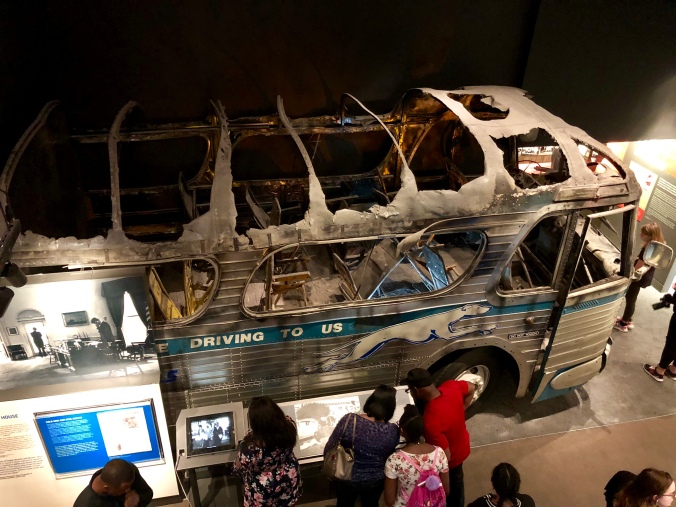 A replica of the Greyhound bus that was firebombed in Anniston, AL in 1961 — Freedom Riders

For More Blog Posts in this series, click the links below:

Stereotypes and Preconceived Notions About Race