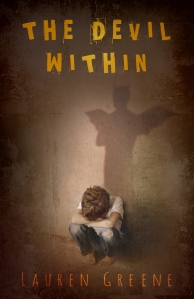 The Devil Within ebook is 99 cents between October 3rd and October 17th!

When nine-year old William loses most of his family in a car accident, he is left alone with a religious zealot of a father. As a result of his father’s abuse, William blames himself for his family’s death and becomes convinced the devil is leading him astray. The backdrop of life in a rural town in the 1960’s sets the tumultuous scene as William struggles to cope in a world no child should have to face on his own. Will William be saved, or will he succumb to the devil within?

What People Are Saying About The Devil Within:

5.0 out of 5 starsPop are so wonderfully described that they remain etched in my mind By K on August 4, 2015

The characters came alive for me in this novel. Will, Lulu, Miz Leigh, Pop are so wonderfully described that they remain etched in my mind. In fact, since I finished the novel, I continue to think about them. Aptly titled, this novel is heartbreaking and tragic but I found, curiously, that this novel sends a positive message about the triumph of a little boy’s spirit over unspeakable grief and abuse. This is a very good book and I highly recommend it. Looking forward to the next novel from this author.

5.0 out of 5 starsThe abuse this poor boy endured after a traumatizing event was torture By Sarah on September 16, 2015
Well written and strong descriptive characters, most of whom I wanted to strangle. It was not my usual read. The abuse this poor boy endured after a traumatizing event was torture! I felt broken for him. I wanted to hold him and comfort him. I could totally relate to how this boy felt consumed by the devil. The words people say to us get burnt into our minds and as a child we are so moldable to these perceptions that others imprint on us. I recommend this book but carry some tissues!
5.0 out of 5 starsA Real Page Turner By Julie on August 5, 2015
I couldn’t put this book down. I just had to know what happened to William. I love that one of the characters had a health condition that was practically unheard of in the period this book was written. The author makes it as common as freckles. Well done! I want to take this child home with me and just love him. There was definitely a devil in the midst. Well written and I am looking forward to the sequel.
Don’t miss out on getting your 99 cent copy on Amazon right now! http://www.amazon.com/Devil-Within-Lauren-Greene-ebook/dp/B011669MVE/ref=tmm_kin_swatch_0?_encoding=UTF8&qid=&sr=

Thoughts on Writing, Faith, Media, and Culture from the Desk of Bill Simpson