Hello friendly readers! I’ve been off cruising, and I’m now just getting back into the swing of things with my writing. Today, I wrote a flash fiction piece for Chuck Wendig’s blog, Terribleminds. I also did something CRAZY, and I submitted a Flash Fiction piece to The Master’s Review. Wish me luck!

Today’s challenge is about real estate. To be honest, I started about three pieces before I finally settled on this one. It’s about memories, but with a little twist. 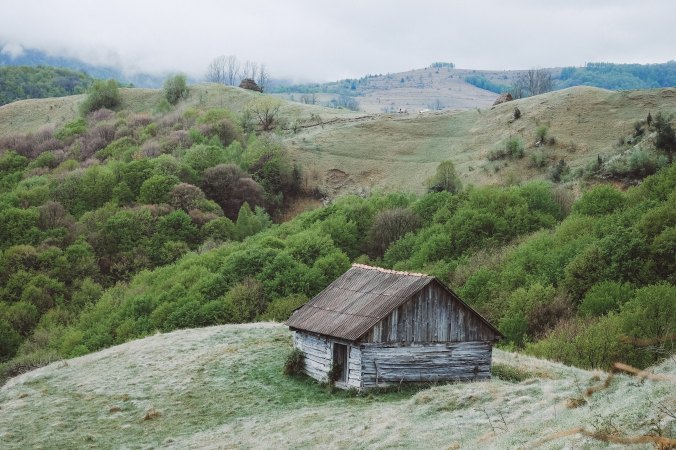 Callie hadn’t been up the mountain in years. The path stood out, still worn by feet. Her father had taken her hand one day, walked her down the path to the valley below, and told her how this footpath had been worn by Indians long before white men ever settled in these parts. Callie never knew if that was true, but she liked the idea of an Indian family walking up to their tee-pee in the same place their log cabin stood.

The cabin stood strong like a soldier but worn and weary from battle. The clearing around the cabin had weeds that went all the way up to Callie’s knees. She bent down and fingered some of the clover by the wooden steps, thinking about how she and Maymay used to make clover crowns to braid into their hair.

Callie stood in front of the steps, amazed the cabin didn’t even have a broken window. It had obviously been deserted years ago. How long after she packed up a bag and disappeared into the moonlit night had the rest of them left? She would never know.

Callie walked up the creaking stairs. She turned and looked at the view. The mountain sloped down and huge evergreens towered up. She could barely see the creek running below and smoke from a rooftop at the center of town rose and disappeared into the blue sky.

She sighed and turned back toward the door. As a little girl, there had been a screen on the door. They never had air conditioning and the screen let the cool air in and the left the bugs out. She had sat on this porch with her sister, brothers, and parents and rocked in handmade rocking chairs while Poppa played the guitar and they all sang out of tune.

She felt a shiver as if the ghosts of her childhood had come up the mountain with her. She opened the door, listening to the familiar creak as the wood pushed against the frame. Dust swirled on the inside of the house, and she waved it away. Light began to filter in, and she adjusted her eyes.

Callie was shocked. Inside the house, her momma’s pink chair stood in the corner with an afghan draped over it. She remembered the afghan. Great Aunt Bertie had made it when Will had been born fragile and premature in the dead of winter. The rainbow pattern had been a favorite of Callie’s, and she remembered sitting on her momma’s lap and touching the coarse wool as Momma sang to little Will.

The bookcases lining the wall contained the Bible and all the classics. She took the Bible down and opened the front page. Her family’s history, inscribed in her father’s scrawling cursive stared back at her. Momma’s birth and death date. And Will’s. Her birth date and Maymay’s and her brothers’ names glared back at her. She thought of the days by the fire. The good old days, she thought of them, where they hadn’t had much but they’d had each other.

The fireplace stood empty, covered in ash. Her brothers hated to clean it out. They would sneeze and cough and complain until Poppa smacked their faces. Momma always came to their defense, but Poppa tsked tsked her.

Callie felt the tears before she knew she had started crying. She walked to the back into her momma and poppa’s room. The bed stood in the corner with dust bunnies under the frame. The mattress was long gone, probably buried with Momma. Will had been six that winter. He had been such a sickly child. He started coughing first. Momma thought he just had a cold, but it settled into his chest and he struggled to breathe. Momma became feverish within a day.

Callie remembered making dinner on the stove and begging Poppa to take them down the mountain to the doctor. She could hear their breathing from behind the closed door. Poppa refused.

“We don’t have the money for that. The herbs will work.”

Only this time, the herbs didn’t work.

Standing in the little room, she remembered the sound as Will took one last raspy breath and never let another one out. Four hours later, Momma did the same. Within a day, Poppa went out to the barn to make their coffins. He left them in the bed until they smelled, unable to stomach the idea of burying them.

Callie remembered sitting by their bedside and holding Momma’s hands. She could still remember Momma’s white face, her cold-stone dead eyes staring up at the ceiling. Poppa said people were supposed to look peaceful in death, but Momma looked fearful. Callie had never forgotten that look.

Six months later, Callie, fifteen years old, left the cabin for good. She awoke in the middle of the night lying in the bed she shared with MayMay. When she crept out onto the porch she stared out into the dark, trying to make out the two crosses. She turned once and looked back through the windows into the living room where she had grown up. She thought about Momma reading the Bible stories to her, with a heap of children gathered around, and little Will securely on her lap. She thought about Poppa with a pipe in his mouth and a grin on his face, rocking in the chair telling Momma not to rile the kids up before bedtime. But mostly, she thought of the two cold, soulless bodies who had sucked the joy out of the house. She hadn’t seen Poppa smile since.

Callie poured the gasoline in the living room. She had placed the Bible in her purse—one thing to remember everything by. She looked around before lighting the match. She tossed it into the puddle of gasoline and watched as the flames began to dance. She walked out the door and down the path as smoke began to fill the crystal blue sky.