A short story to break my writing block. Started this a while ago, and decided to finish it today. Now I’m working on some more substantial writing. I hope to set goals and be more active on my blog again too. 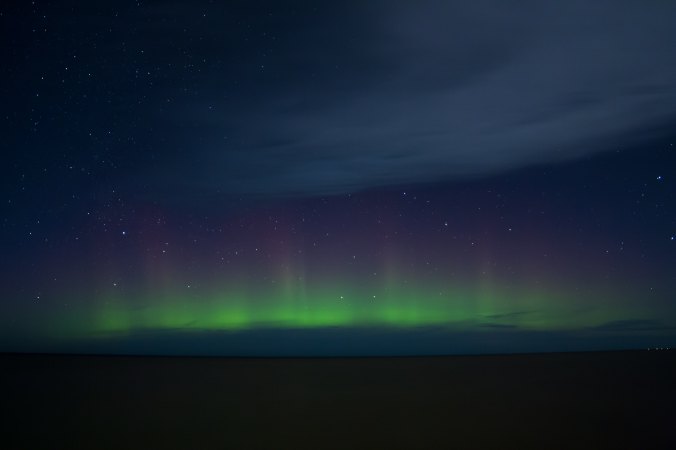 “Daddy, tell me about the aurora borealis,” Hetty said.

I sighed, settled down on to her bed, tucked the blanket under her chin, and began the story for the hundredth time in my daughter’s short life.

When I wasn’t much more than a boy I trekked up to Alaska to do some fishing. In those days you could hitchhike just about anywhere. I didn’t have a lick of money, but some kind strangers gave me a ride. Nobody worried about murdering and all that. I stayed up there to fish King Salmon. Worked for a guy named Kallik. Name meant lightning, he told me. And boy was he lightning. He’d get so drunk that the guy on his bad side could never see his fist coming.

We lived in a log cabin. Free board, and made a little bit of money. Not much mind you. A bunch of drifter guys just trying to make a living someway somehow. I didn’t have what you have, a family who loved me. I just had myself. I wasn’t more than eighteen. Just a boy really, and a drifter.

One day, Kallik invited me to hike with him. I showed up and he told me I looked just like a typical white guy—unprepared for the situation at hand. He drapped a fur coat over my shoulders and said I would need it. We would climb the mountain, he said, and meet some of his friends and family to watch the aurora borealis. We would camp at the top of the mountain, eat meat off the spicket, some shit like that. I couldn’t even imagine—not like I’d been in Scouts as a kid.

We hiked for what seemed like days. Kallik gave me jerky to sustain me. He had energy like a battery—just kept on going. Not me. I felt out of place that day. As we went up in the mountain, the snow came. I was glad I’d bought a good pair of boots with my first paycheck. I was grateful for Kallik’s fur around my shoulder. We walked for four hours—must’ve been, and then I saw smoke rising on the horizon, as the sun had started to drift down behind the mountain.

“That’s camp,” Kallik said, when we arrived at the top.

People sat around the camp site by the fire, in tents, playing music, talking, cooking food. I felt like I wandered back into time. I felt like I was intruding on some private ritual where I didn’t belong.

“When the lights come out, my people say it’s the spirits coming out to play, Kallik told me as he sat down on a log and held his hands in front of the fire.”

“I sat down next to him. A woman with a long black braid came out of the tent. I couldn’t help staring at her. Her eyes shone with a light I’d never seen before as if she could see the past, present, and future all at once.

“Why’d you bring the white guy?” she immediately asked Kallik, as she took a seat next to me.

We ate and sat in silence for a while. The lights came out to play, and we stared in awe. A silence fell upon camp like the quietness of falling snow enfolding the world.

“It looks supernatural,” I said. “I can see why people flock to see this phenomenon.”

“Just science. Magnetic poles and such,” Meri said, sounding bored but giving me a cockeyed smile and a wink.

Kallik wrapped furs around our shoulders to keep us warm in the bitter cold night, and we sat staring up at the sky unable to look away from the beauty of existence.

“Mary doesn’t sound like an Inuit name,” I said, turning to look at the woman next to me.

Meri wrapped her arms around me and leaned her head on my shoulders causing my heart to beat rapidly and something otherworldly arose in me like the green lights dancing across the sky drawing us together.

“It’s M-e-r-i. Short for Meriwa,” she said, as I wrapped my arms around her and leaned in.

I shook my head.

“Thorn,” he said, with a little laugh.

“And your mom has been a thorn in my side ever since,” I said, wrapping my arms around my daughter, brushing her long black hair out of her face, and kissing her goodnight.

Thoughts on Writing, Faith, Media, and Culture from the Desk of Bill Simpson